I’ve been meaning to post more lately, but all things recently came to a halt because I had my baby! For those of you that follow this blog, you know that I started Pregnitude earlier this year in an attempt to get pregnant and–suprise!–it actually worked! You can read about my Pregnitude story here.

Of course, I was super happy to be pregnant (aside from the morning sickness and all that), but my happiness quickly turned into anxiety. I think many women, even before they have a gender-determination ultrasound, know what they are having. Obviously, I know there was always a chance that I would have a girl, but early on my pregnancy I REALLY started freaking out that it was a girl. My intuition has always been correct on most major things in life, so as my pregnancy progressed, I had to come to terms with all the pink that was about to happen.

What’s so bad about having a girl? Well, nothing, of course. Unless you have convinced yourself that you are going to pass down your bad-hair and PCOS genes down to her.

At first, I brushed off my intuition since it was still so early. As my pregnancy progressed and I started having more symptoms, I realized said symptoms were entirely different than my pregnancy with my son. Whereas I shed a bunch of hair up until 20 weeks with my son, I had no shedding this time (thank God, because there really isn’t anything left to shed). I had bad acne along my jawline with my first; my skin was pretty dang clear this time. My aches and pains were minimal with my son. I developed SPD this time around (don’t know what it is? Google it. Not fun. Basically, it’s excruciating crotch pain that stemmed from my hips going out of alignment) and couldn’t turn over in bed or walk efficiently alot of the time. Heck, even the heartbeat was high, which typically indicates a girl over a boy in the old wives tale. Things were just completely different this time. Everyone says it really doesn’t matter and that every pregnancy is different. But, I knew the baby was a she. And the more I thought about it the more I panicked. Ironically enough, I wanted to be “team green” this time. My husband threw a fit about it, but I really wanted to be surprised about the sex at the birth, rather than finding out early. Or, maybe since I already knew, I could hold out hope that it was a boy just a bit longer going this way.

There were many nights that I cried to my husband about it. He knows about this blog, of course, but I doubt he checks it. He knows I have hair loss and PCOS but I do my concealers and my toppers out of sight. He doesn’t truly know HOW bad things are because I keep it from him. So, when I started hyperventilating about the fact that our daughter would have a very good chance of having the same condition, he couldn’t really get it. When I tearfully told him that I’d have to be the Mom that does french braids and bows and stuff and in doing so I’d feel like a complete fraud he looked at me blankly.

What was worse was that I didn’t know what to do with these feelings. I wasn’t unhappy about the pregnancy by any means, but I felt alone. My husband didn’t understand my fears, and I had no one else to talk to about this. I was scared about how I would handle this after she was born, too. How I would present myself and my condition to her? How I would handle her questions about my toppers (and eventual wigs?!)? How I would help her when she realizes that she will likely have the same fate as me?

So, how I decided to handle it for many months was simply not to. As she grew inside me, so did my to-do list. Up until just a few weeks before the birth, I had nothing done: no clothes, no prepared nursery, nothing. I had my son early, at 35 weeks, so once I hit week 32 or so I went into overdrive. We painted her room in gender-neutral gray and white stripes and settled on doing purple and coral accents after the birth. We finally bought some clothes…for some reason these were a mystery to me. I didn’t realize girls wear tutus so early in the game. And headbands and stuff. I was just so used to boy stuff! I did get a few boys pieces, too, just in case, but we really stocked up on the girl stuff. I didn’t really feel ready emotionally for a girl, but if she was coming, at least I had some “stuff” to get us through.

On October 24, my water broke at work and it was go-time. I had my son really, REALLY fast so we rushed to the hospital as fast as we could. It was a pretty painful experience and I was scared I wouldn’t be able to get an epidural. My contractions started within 30 minutes of my water breaking and they were two to three minutes apart. It took about an hour from the time I left work to the time I got into the actual hospital room. By this time I was a hot, screaming, sweaty mess. But, I still made sure to check that my concealers weren’t dripping throughout all the sweat. 🙂 A girl’s gotta do what a girl’s gotta do. The nurses asked me a zillion questions through the contractions and took my blood so that I could get my epi. I remembered with my son it took about an hour for my blood to be tested before they could administer the epi; I knew I didn’t have an hour at the rate things were going. That really freaked me out because I was in a ton of pain and wasn’t sure I’d be able to deliver without some pain relief. Throughout my shrieks, I kept asking, “how much longer? how much longer?”

Finally, they wheeled the cart with the epidural in–thank GOD! Then nurse said she had to check me one more time before I got it, and she did. And I was fully dilated. My epi was denied and even though I begged for it anyways, it wasn’t in the cards and I had to do it all-natural. Lots of women do this every day without meds, but since doing it this way wasn’t in my plan, it really made me anxious and probably made the pain worse.

The baby was definitely coming but the doc wasn’t there yet, so the nurses kept telling me not to push. Those of you that have children know that at some point, stopping what your body is trying to do just isn’t possible. He finally arrived, got his gown on, and with three or so pushes my baby was out. From the time my water broke to the time I delivered was two hours and 33 minutes. And score, my Bumble & Bumble didn’t drip!!

I immediately felt better and was enjoying a few moments of quiet while the doc did whatever he did with the baby (suctioning and stuff, I guess). Finally, it was time. He asked if I wanted to meet my baby. Of course I did! After all that hard work and pain at this point I didn’t even care that it was a girl as all my insecurities were gone…I just wanted to meet and hold and snuggle her.

He lifted the baby up and onto my chest and told me the three words I never imagined I’d hear: “It’s a boy!”

So, meet my (Pregnitude) baby boy! 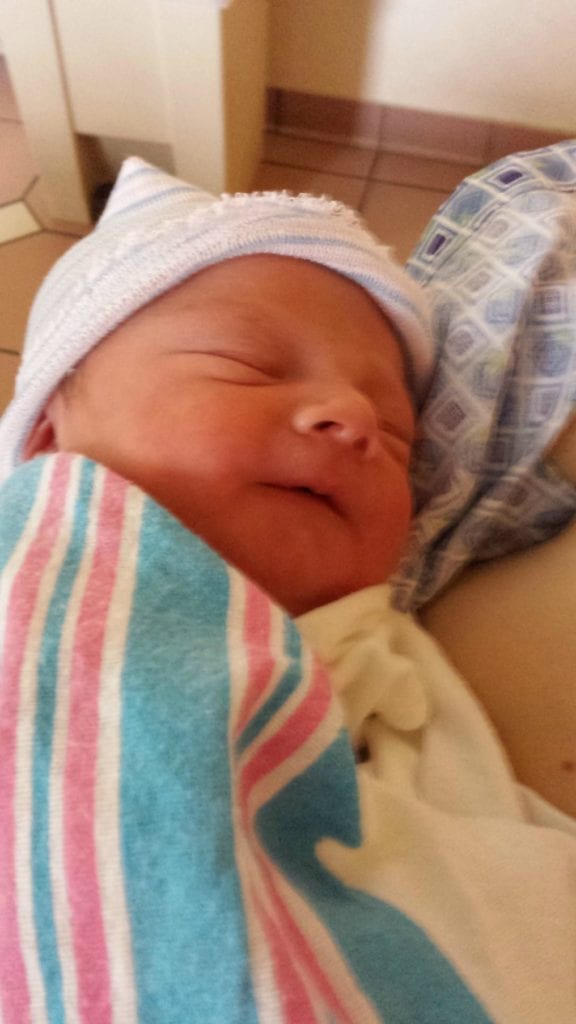 And seriously — check out his hair! I’m totally envious (in a good way because it’s beautiful!) 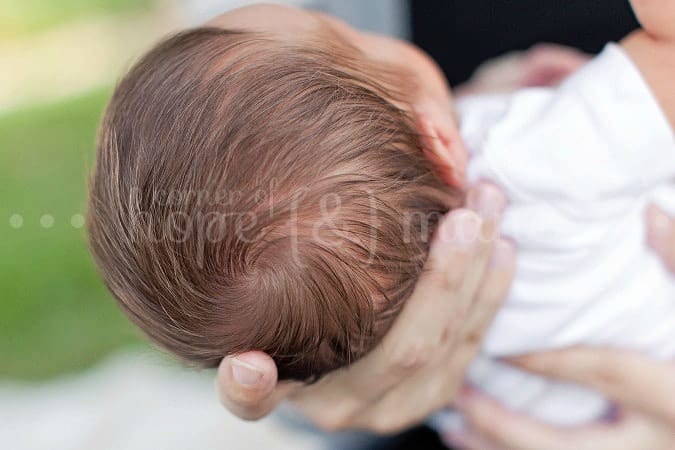 23 thoughts on “Meet My Pregnitude Baby (And a Bit About Hair…)!”