So, does Spironolactone for hair loss work in women? I got put on Spiro (a.k.a. Aldactone) about four months ago. My doctor was actually hesitant to put me on it because he felt:

1) Even though I complained of thinning hair, I hid it well he couldn’t see it. “It doesn’t look that bad.”

2) The few darks hairs down the side of my face as well as at my jaw line didn’t warrant anything more than a tweeze-job. I showed him the almost-white, fine hairs that were now actually getting long enough to tug on (ew!) under my jaw, but he dismissed those.

3) Acne is something most women deal with every now and again.Needless to say, I was frustrated. But, he did decide to put me on 50 mg. of Spiro 2x/day to see if it would at least improve the hirsutism (excess hair).

Ugh! He did agree to try it, finally.

Within just a few weeks I was noticing less dark hairs on my face and jawline; the fine, white-ish hair under my jaw all but disappeared (so, I guess from that standpoint, Spironolactone for hair loss DOES work, ha!). My acne was largely reduced (which is great, but I have the type of skin in which ANY acne–no matter how small–leaves a mark. While it’s easily covered with makeup, it’s annoying that my face never looks as good as it should. Oil production on my face and scalp also diminished.

Well, the jury’s still out on that one. I did get the “dread shed” a few weeks into Spiro–and I got it BAD. My hair had actually never looked so bad. I haven’t noticed any growth on the top part of my head (I always describe it as where sunglasses would hit) but, it also doesn’t look as bad as it did. My guess is that the hair that fell out during the Spiro “dread shed” came back. However, I don’t notice any additional growth in that area quite just yet.

Here’s what I do notice: 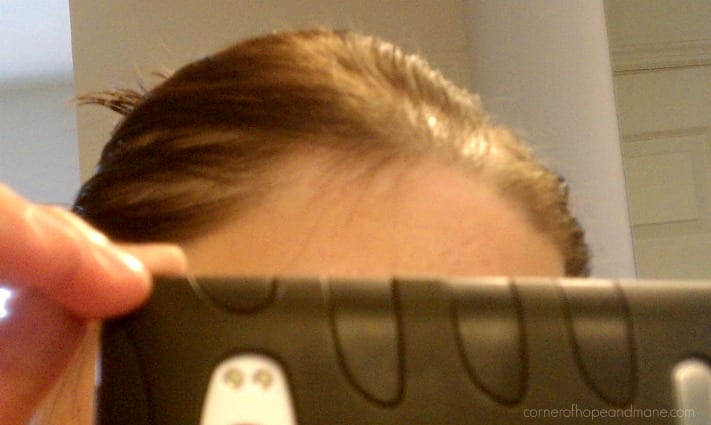 Do you see the little hairs (about 3/4 of an inch) on my temple? That’s regrowth from the Spironolactone. I’m unsure, however, if this is *new* growth, or hair that I lost during the shed. I didn’t notice this area thinning before, so I’m hoping it’s new.

This area was the first area that “came back” after I had postpartum shedding in 2011, so that’s why I’m leaning towards the fact that this is likely not new growth, but rather regrowth.

Bottom line: Right now, I’m unsure if Spironolactone for hair loss is the only answer…perhaps the Spiro combined with other things will help my hair even more. But, things are not worse and they look like they could be heading in the right direction. Keep your fingers crossed for me, will ya?

177 thoughts on “Spironolactone for Hair Loss: Does it Work? (Photo)”