This is an update to a post I did forever ago about flying wearing a topper – more precisely, going through metal detectors when the clips of your hairpiece are made of metal.

So many write in about this, that I figured this post was due for an update. I’ve traveled several times since this original post was published, and sometimes I breeze right through security without so much as a beep…and sometimes not.

Read the below about one particular instance I’ve had flying, and be sure to read the update towards the end. 🙂

So, what happens when you are interviewing for work out of state? A lot of air travel. With security checks and walk-thru thingies that inevitably will beep and point everyone to a flashing, neon sign that reads, “Fake hair, fake hair!”…right?

That’s a bit of an exaggeration, but to be honest, I wasn’t quite so sure what would happen. I had a feeling that my metal topper clips might just betray me.

You may recall I posted awhile back about wearing microlink extensions on my super-thin hair, back before I started wearing toppers. These I wore through airport security and since my head was covered in 40 metal beads, I did get flagged when I walked through on one of my legs of my trip.

It was one of those machines where you enter and you put your arms up and you get scanned. It showed the person of an outline and where the “problem” was, which was all around my head.

Honestly, it was not a big deal. A TSA agent (who was wearing hair herself), came over and patted my head, and I told her, “I have hair extensions in” and she said, “Girl, I know that’s right” and I went on my merry way.

What I wear now is a solution to women’s hair loss.

My cure for it.

Or, maybe “taboo” isn’t the best word for it, but a topper is something so few people know about.

I thought about ways I could avoid having the metal topper clips set off the detector.

For example, I considered wearing a wig on the plane – no clips, no metal, nothing to raise attention. But, I’m not 100% comfortable in wigs right now.

I could wear a big, stretchy headband and my hair in a ponytail. Eh, my ponytail is pathetic, so that option was out.

Concealers were a God-send at one point in time, but that ship has sailed.

Or sunk, depending on how you look at it.

I finally just said “screw it”, decided to wear my topper, metal clips and all, and hope for the best.

Would you believe not one alarm went off?!

I had to go through both a regular, walk-thru scanner as well and the full-on circular body-thing (does it have a name?? I’m struggling with that, here) and no so much as a blip occurred.

Now if it HAD, I already had my story in place: I would’ve just said I had extensions in, just like last time. They would have patted my head (maybe) and that would’ve been it.

If you are super-nervous about this and it comes down to an inspection, you could ask for a private screening, but in my opinion, that’s making a mountain out of a molehill.

So, that was THAT trip. I’ve flown many times since then, and have had to have my head be patted down a few times.

I know what you’re thinking: patted down??? I’ll die, Lauren, I just will.

It’s not what you think.

No alarms bells sound, or anything.

But, after going through the body scanner, something obviously flags TSA that something’s going on with my head.

The agent usually tells me something along the lines of, “I have to feel your head really quick”.

I generally wear my hair up, like this, when I travel. This is Top Secret (you can try this topper as a member of the Corner of Hope & Mane private community!) Well, for normal days, too, but always when I travel. 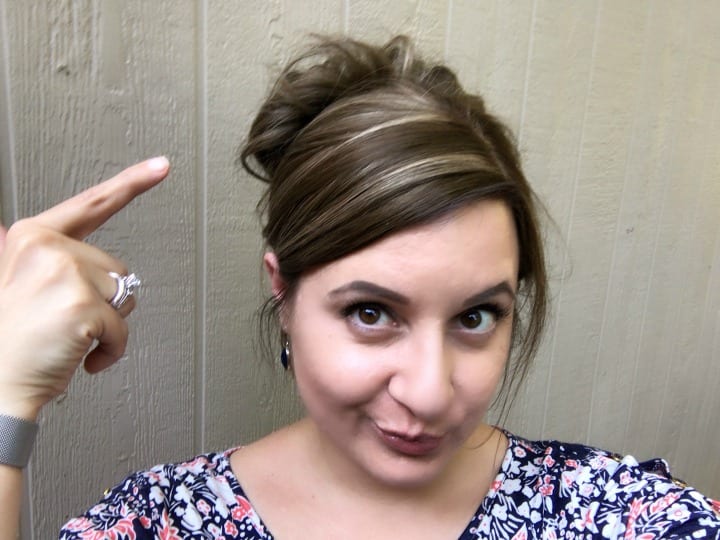 From the back (super messy!): 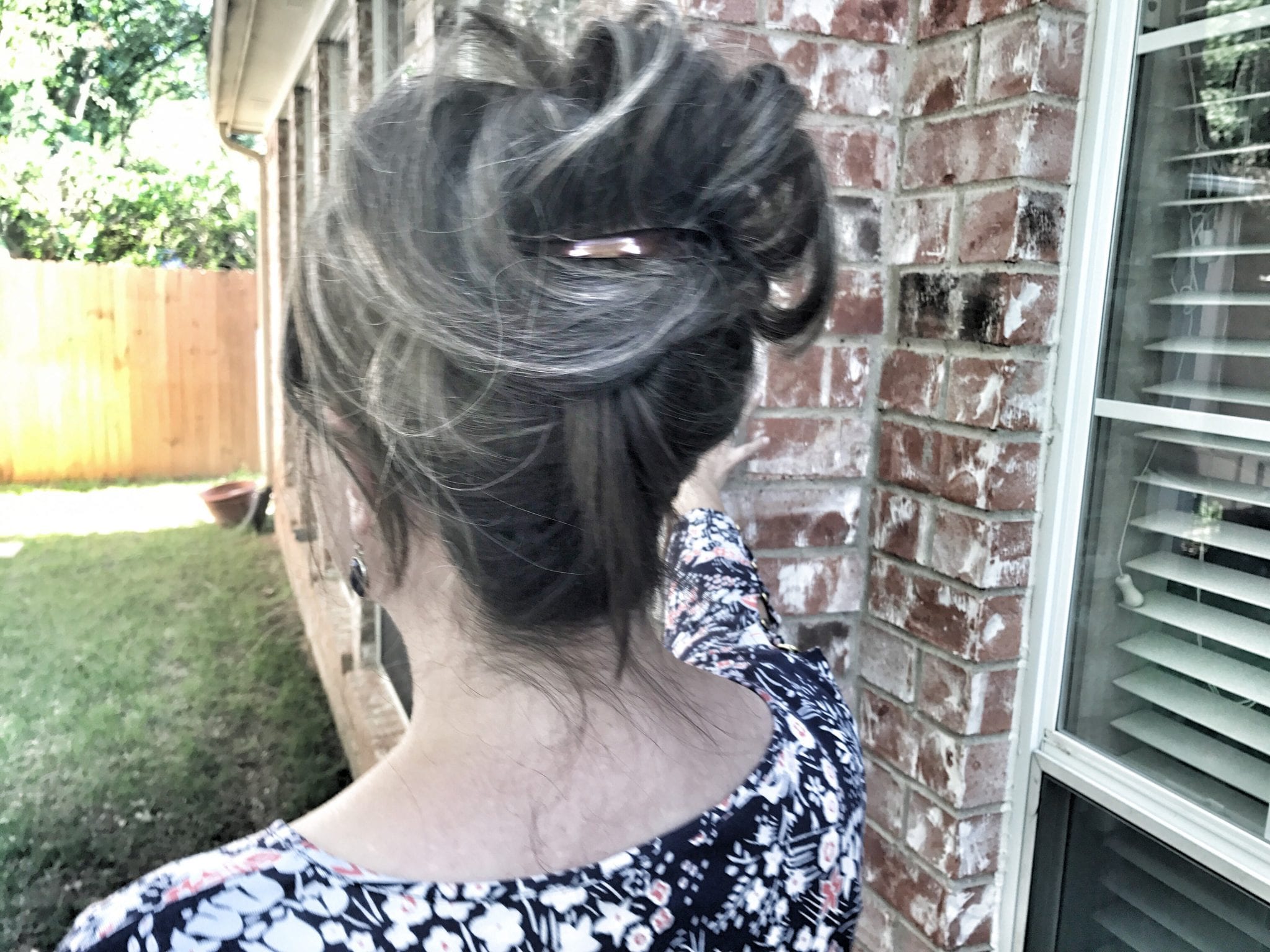 I’m not sure exactly what flags the system.

It could be my topper clips.

It could be my large, metal barrette.

The beauty of it is…if I don’t know, the security peeps probably don’t either.

Usually they just place one hand over my updo, and do one quick pat.

They don’t ask me to remove anything.

They don’t look at me funny.

So yes, sometimes you MAY get flagged at the airport.

But it really ain’t no thang, as long as you don’t make it out to be.

If you don’t/can’t wear your hair up, you can always throw in some bobby pins, like I’ve done with this front-shot of my half up, half down style.

See how cute it is? 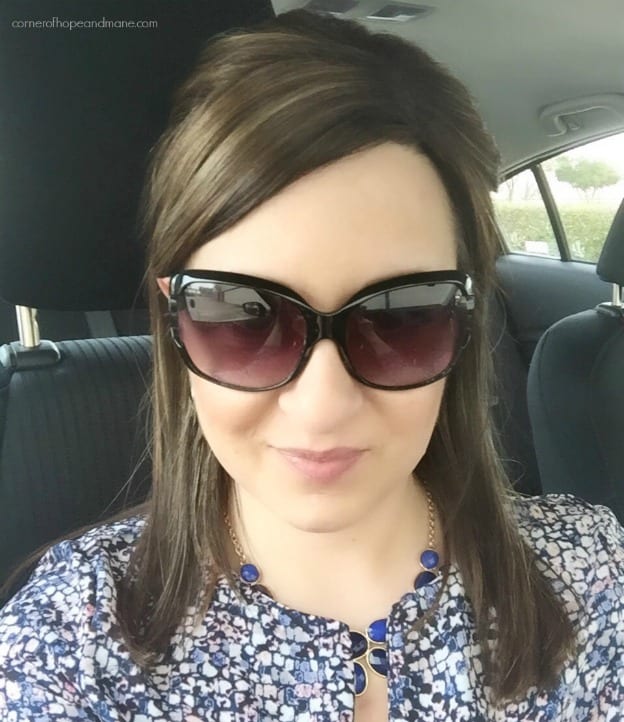 I know everything is heightened when it comes to hair loss.

But I promise you, it’s no big deal!

And isn’t travel stressful enough to have to worry about our hair??